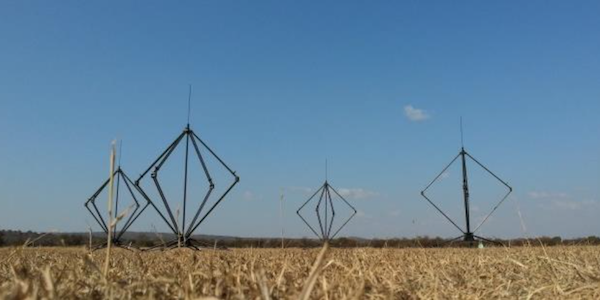 The antenna is intended as an element of DF interferometer arrays made from many DF-A0049 antennas. The antenna is able to switch between one of three polarization modes (LHCP, RHCP and a VP omni) by applying different DC voltages into the N(f) connector interface. In LHCP and RHCP modes, the antenna element is capable of receiving waves of left-hand and right-hand polarization, respectively, incident from the upper half sphere, with a gain peak at the zenith. In VP omnidirectional mode, the antenna operates similar to a monopole antenna, able to receive waves with vertical polarization with a gain peak near the horizon and a null overhead.

The DF-A0049 antenna includes an integrated switch with lightning and ESD protection. There are no nonlinear active components in the chain to introduce unwanted distortion on the received signals. It uniquely features a fully integrated quadpod for rapid deployment, but can also be bolted to a plinth for semi-permanent installations. When stowed, the antenna collapses into a very small form factor for easy transportation and storage.

To obtain price and delivery information about this product, click the button below.

Just browsing? Click a link below to display related items.